Uber looks to the skies 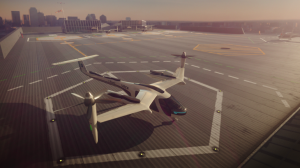 Uber has launched a ‘flying car’ project called Uber Elevate, which it hopes will be ready to take off in the US by 2020.

In a white paper published in 2016, Uber had said it would create a network of on-demand, fully electric aircraft that take off and land vertically.

“Essentially what we want to create (through Uber Elevate) is not only an Uber on the ground but also an Uber in the sky,” Uber CEO Dara Khosrowshahi told a press event in New Delhi last month.

“They will be safe, they will be quieter, we are talking to manufacturers right now, and we are talking to cities about how you have to build this technology to be safe, what kind of air route can you create, from city centres to airports etc. Ultimately it is very much in the interest of a number of cities to solve congestion problems and create high-speed quarters for travel within their cities,” says Khosrowshahi.

This week the technology giant plans to host officials including Donald Trump’s transport chief, and the head of America’s airspace watchdog, at a summit in Los Angeles, at which it hopes to establish itself as a leader in urban flight. Uber has already hired senior Nasa and aerospace employees to deliver chief executive Dara Khosrowshahi’s plans.

The projected time frame for delivering the flying vehicles and for building physical and technological networks to support them is a mere five years. They would initially be human-piloted vehicles–but per Uber’s sales pitch, would evolve into fully autonomous ride-sharing flyers.

Uber is not alone in the race. At least 19 companies are also developing flying-car plans, according to The Verge. These include manufacturers like Boeing and Airbus, and small startups like Kitty Hawk, who were testing their flying vehicles in Christchurch, New Zealand earlier this year. Meanwhile, Uber has made significant strides in partnering with a handful of aircraft manufacturers, real estate firms, and regulators to better its chances of developing a fully functional, on-demand flying taxi service.