The year’s used car boom has continued in the build up to Christmas with 14,642 used cars crossing the border last month, bringing the year to date total of 158,469 units. This figure is 5793 ahead of total imports of used cars for all of 2016.

Imports of used light commercial vehicles dropped significantly – down 12.3 per cent on the same month last year and 9.3 per cent on October’s 712 units.

Although there was a 27.3 per cent fall in the number of new light commercial imports during November compared to October’s 3909 total, November’s 2841 units total was up a massive 53.3 per cent when compared to the same month last year.

As usual, the vast majority of used imported cars came from Japan with 13,709 units imported in November – a 10.2 per cent increase on the same month last year, resulting in Japan holding a monthly market share of 94.68 per cent.

Importers brought 389 used cars in from Australia – a 4.9 per cent decrease on November 2016. Year to date, 5,110 used cars have been shipped from Australia. There was a 29.4 per cent fall in used car imports (197 units) from the UK during November compared to the same month last year, while Singapore was up 27.9 per cent on 142 units. 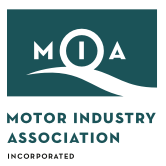 The latest new vehicle sales figures for October reveal a very strong performance for both new passenger and commercial.

“There were 15,530 new vehicle registrations for the month of October, making it the strongest month of October on record and the second strongest month of any month ever. It was only the second time the new vehicle market has past 15,000 registrations in a month, the other being in June this year. Registrations were 9.83% (11,986 units) year to date above this time in 2016 and for the month were up 5.6% (821 units) on October 2016.” Said David Crawford, Chief Executive Officer of the Motor Industry Association.

Year to date the Ford Ranger remains both the top commercial vehicle model and the top model overall with 7,950 registrations compared to 7,045 for the Toyota Hilux.

Vehicle segmentation for the month of October reflects the strong monthly registrations of the Toyota Corolla. The top segments were small vehicles with 20% share, followed by the SUV medium segment with 15% and Pick Up/Chassis Cab 4×4 segment with 13% market share.

“The 2017 new vehicle market is expected to easily break through the 150,000 new vehicles mark for the first time.” said Mr Crawford. 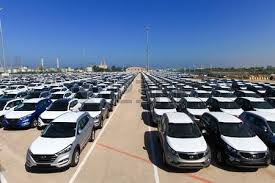 Registrations of new vehicles have exceeded 100,000 units year to date – the fastest this milestone has ever been achieved. By the end of August, 103,923 new vehicles had been sold.

Registrations were 11.3 per cent above this time in 2016, while the total registration of 13,063 vehicles for the month of August was up by three per cent on August 2016.

David Crawford, chief executive officer of the Motor Industry Association, says that there was a mix of vehicles registered in August, reflecting changing consumer preferences.

Commercial vehicle registrations are up 19.6 per cent to 5,691 units on this time last year and Toyota remained that market leader with a 25 per cent share of the market selling 1,114 units.

Toyota also managed to knock the Ford Ranger off the top spot with the best-selling commercial model being the Hilux with 17 per cent market share and selling 779 units in the month of August.

The Ranger slipped back to a 15 per cent share, selling 690 units, however remains at the top of the list for the year’s best selling commercial vehicle. The Ranger is also the top model overall with 6,320 registrations compared to 5,497 for the Toyota Hilux.

The top segments for the month of August were medium SUVs with 15 per cent share, followed by Chassis Cab 4×4 with 14 per cent and small passenger vehicles with 11 per cent market share. 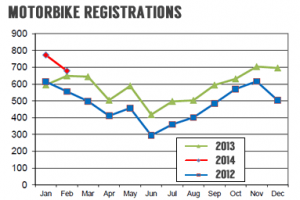 New motorcycle registrations remained firm in February. On the back of strong sales of over-60cc machines, on-road motorbike sales of 679 units were 30 units ahead of February 2013. For the year to date, sales are now ahead of last year by 208 units. END_OF_DOCUMENT_TOKEN_TO_BE_REPLACED