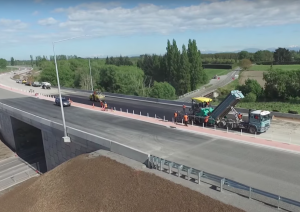 The five-kilometre highway is a new four lane stretch of road extending the Christchurch Northern Motorway between Belfast and Johns Rd.

Traffic is slowly being allowed onto the new bypass after an open day on October 29 where around 10,000 walkers, cyclists and runners took to the road.

NZTA said that the bypass being opened in stages allows the project team to complete the final parts of the road, including connecting the bypass to the existing road network and carrying out surfacing work on the on and off ramps.

“There are speed restrictions in place in the area, however it is important that all road users play their part and stay focused to keep everyone safe” says Transport Agency Principal Project Manager, Geoff Griffiths.

All lanes of the bypass are expected to open to traffic by November 17 (Show Weekend), but the final low-noise asphalt surfacing work will not happen until spring 2018.

Once complete, the bypass will reduce congestion and travel times and provide a better and safer link throughout greater Christchurch, says Mr Griffiths. 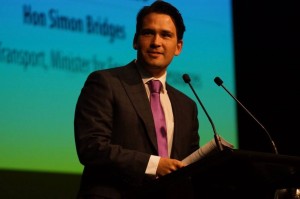 Transport Minister Simon Bridges says a new lane along a section of Auckland’s Southern Motorway will help ease bottlenecks and improve journeys for thousands of motorists.

The additional southbound lane has now been opened to traffic between Hill Road and the Takanini interchange, and between the Takanini southbound on-ramp to the Pahurehure Inlet as part of the Southern Corridor Improvements project.

“The $268 million project is one of the Government’s accelerated transport projects for the Auckland region and will add extra lanes in both directions as well as upgrading the Takanini Interchange,” Mr Bridges says.

“The Southern Corridor connects Auckland and Northland to the rest of the country. The improvements will improve safety and journey reliability in the short term while supporting the rapid population growth in the south of the region in the next thirty years.

“It’s great to see the sections of extra southbound lanes now open in preparation for the opening of the Waterview Connection to ensure there’s enough capacity for the additional traffic joining State Highway 1 from State Highway 20,” Mr Bridges says.

Further improvements will extend the extra lanes both southbound and northbound, while the upgrade of the Takanini Interchange will provide new ramps for better traffic flow and easier access to the motorway. The project is due to be completed in 2019.