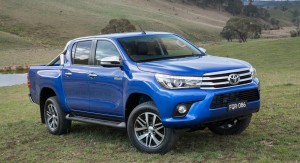 The Toyota Hilux was Australia’s best-selling vehicle in November.

According to the latest results released by VFACTS, November sales sky-rocketed which have kept the Australian motor industry on target for another best-selling year.

Industry sales rolled past the 1 million mark for the year to date as the November total reached 101,365, a gain of 2.5 per cent on the same month last year.

This keeps the industry running at 0.6 per cent ahead of last year’s record pace.

Toyota remained the market leader with an 18.6 per cent share of the November sales, followed by Mazda, Hyundai and Holden, with a share of 9.2, 8.7 and 7.8 respectively.

The Toyota Hilux was Australia’s best-selling vehicle in November with 4,103 sales, followed by the Ford Ranger, the Toyota Corolla, Mazda3 and the Mazda CX-5.

Comparing November with the same period last year, small cars showed a 6.4 per cent increase against a general decrease in passenger car sales, which is down 7.3 per cent.

Majority of the market movement was again with the uptake of small and medium SUVs, the small SUV segment being the star performer where sales increased by 31.1 per cent.

SUV sales generally were up 8.6 per cent and light commercials up 7.9 per cent compared with November last year. Year to date, the two segments have risen 4.7 per cent and 7.5 per cent respectively.

Strong sales were recorded across all states except for the two territories which suffered slight falls.

Business buyers returned in force to the November market. While sales to private buyers fell 3.4 per cent on the November 2016 result, business purchases of SUVs and light commercials rose by 12.9 per cent and 14.6 per cent respectively.

The Chief Executive of the Federal Chamber of Automotive Industries, Tony Weber, said that with less than one month remaining, he remained confident that the industry would surpass last year’s record total.

“The momentum built in the market over the past few months appears to be continuing so we’re on target for another record year,” he said.

The Australian Federal Chamber of Automotive Industries (FCAI) reports that three of the growth segments in the Australian new vehicle market continued to rise in September, despite a 2.4 per cent dip in the overall market compared with the same month last year.

The chief executive of the FCAI, Tony Weber, said that while there was a modest sales fall in September, strong activity was recorded across several key segments.

A total of 100,200 new vehicles sales were recorded in Australia last month, a fall of 2.4 per cent compared with September 2016, according to the industry’s official statistical service VFACTS.

“Any month over 100,000 total sales has to be seen as a strong outcome, proving there is continued value for the consumer in the market,” Weber said.

Market leader Toyota recorded a 1.07 per cent rise in sales during September for a dominant 17.3 per cent share overall, followed by Mazda with 10.3 per cent, Hyundai with 8.1 per cent, Mitsubishi with 7.1 per cent and Holden with 6.9 per cent.

The Ford Ranger light commercial was Australia’s top-selling vehicle for September with 4,318 sales, followed by the Toyota Hilux with 3,822, Toyota Corolla with 3,055, Mazda3 with 2,776 and Holden Commodore with 2,547.

SUV and light commercials remain the two robust areas of the market, accounting for a 58.8 per cent share of total sales year to date, up from 56 per cent in 2016.

The overall market remained 0.2 per cent ahead of last year’s record total on a year to date basis.